Alumni Wine by Cornell Alumni Affairs brings wine made by alumni to alumni who love wine, in bottles featuring alumni-created renderings of Cornell’s vast campus. We are proud to share the breadth, uniqueness, and quality of the wine being made by alumni across the country. The 2021 Collection was selected by sommelier, Thomas Pastuszak ’06 and features artwork by Peter D. Gerakaris ’03 that references both the campus map and the beauty of Cornell Botanic Gardens. 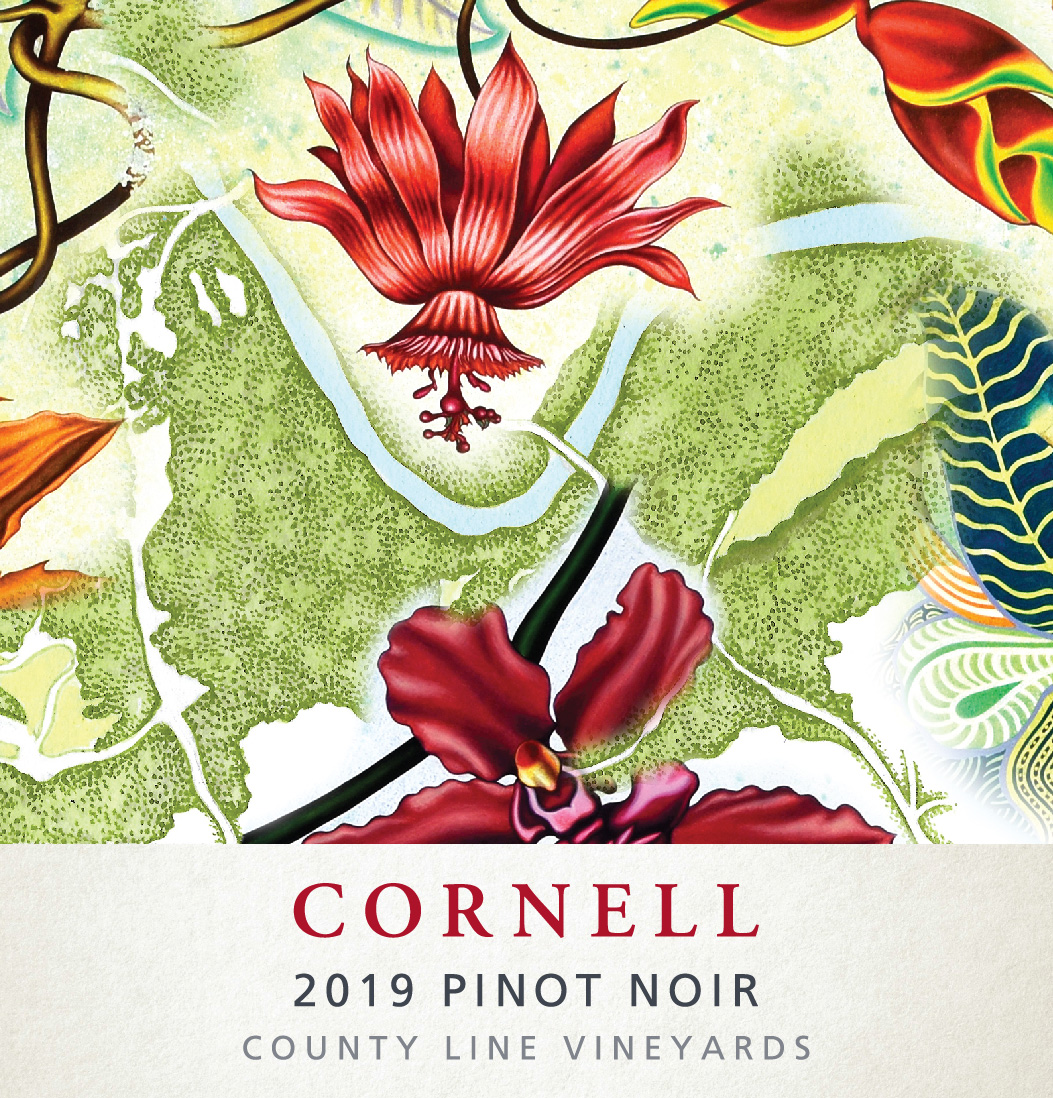 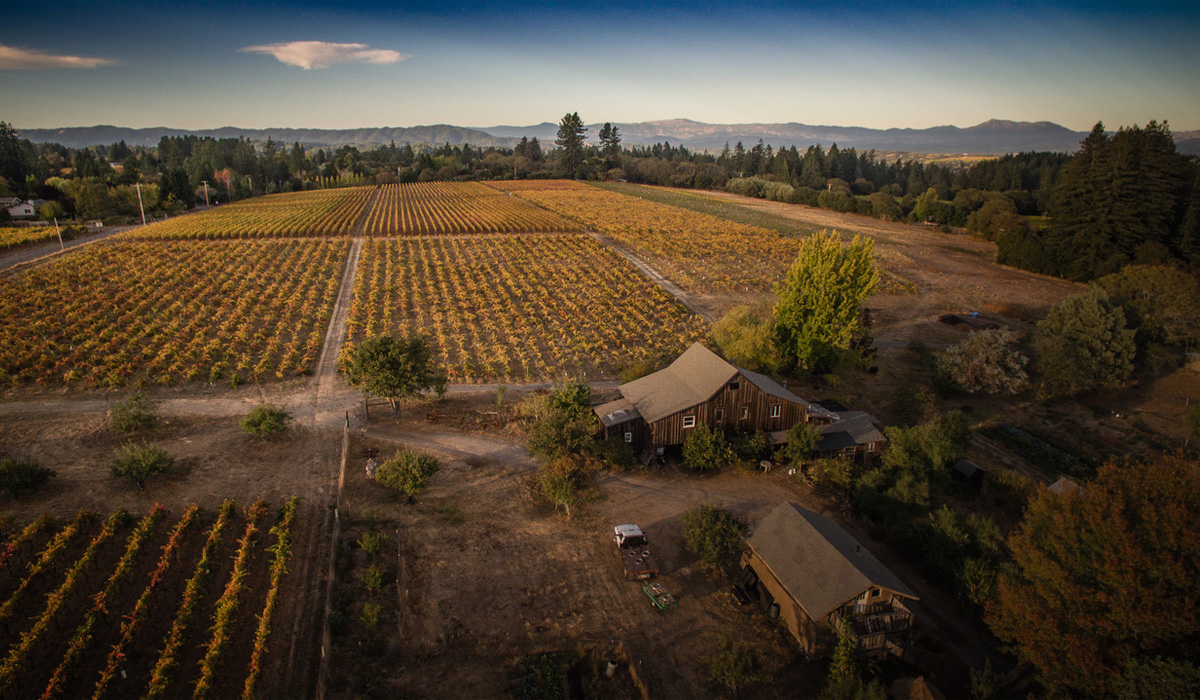 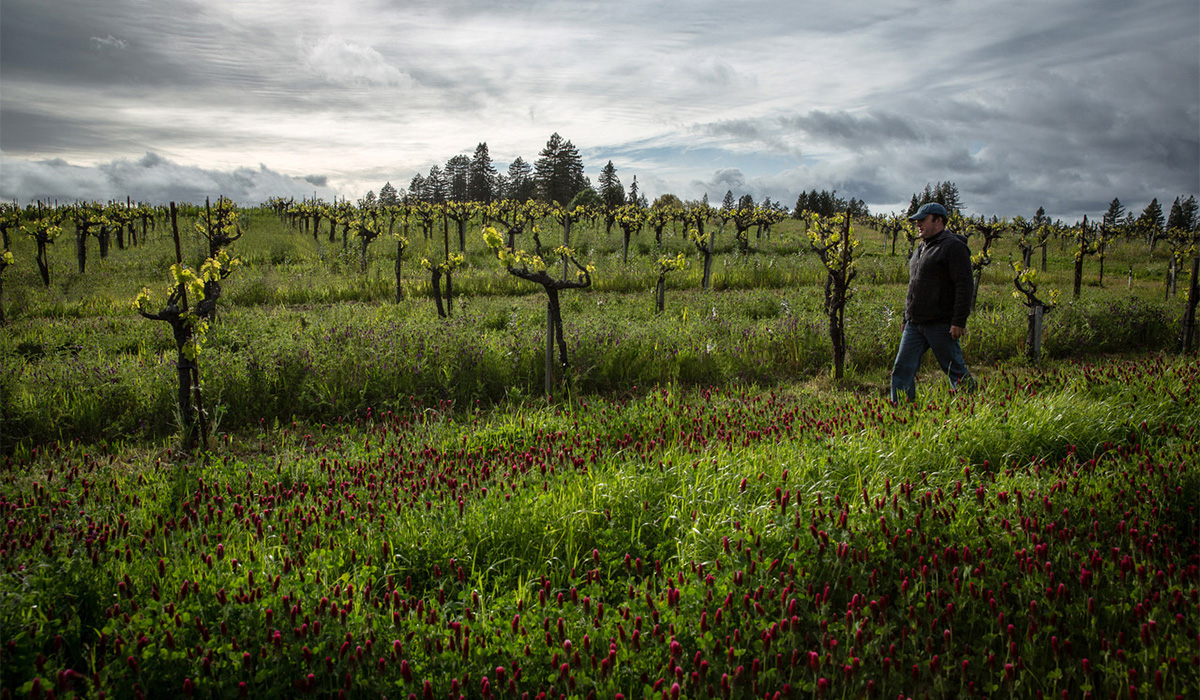 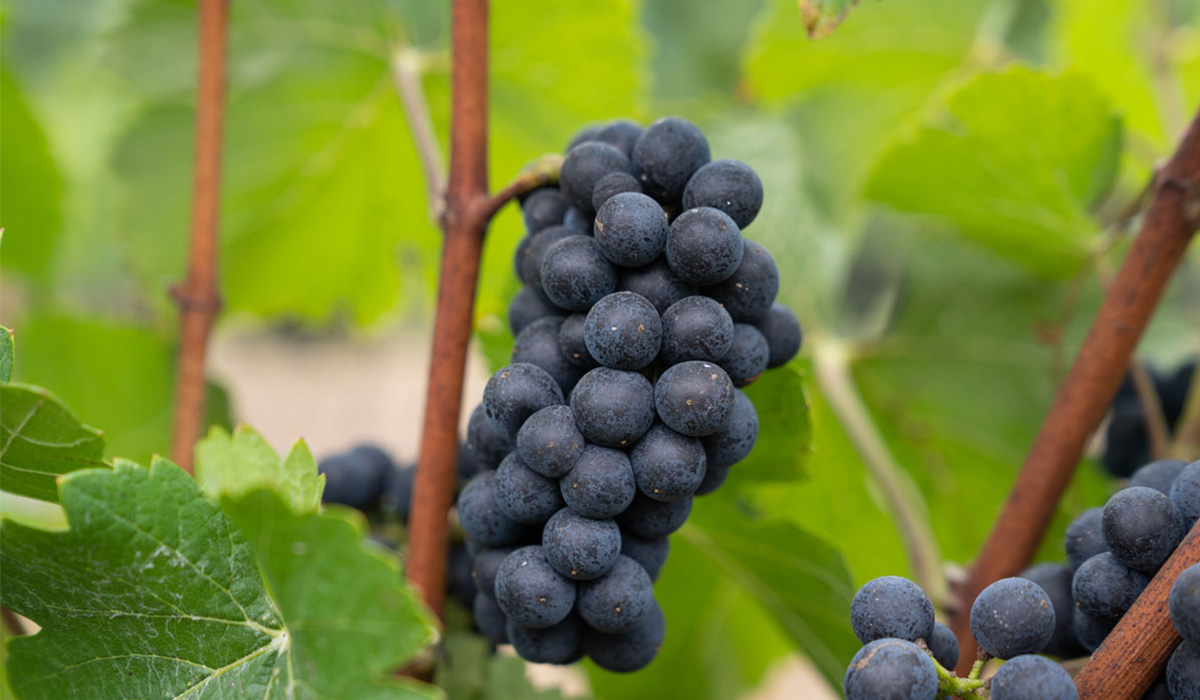 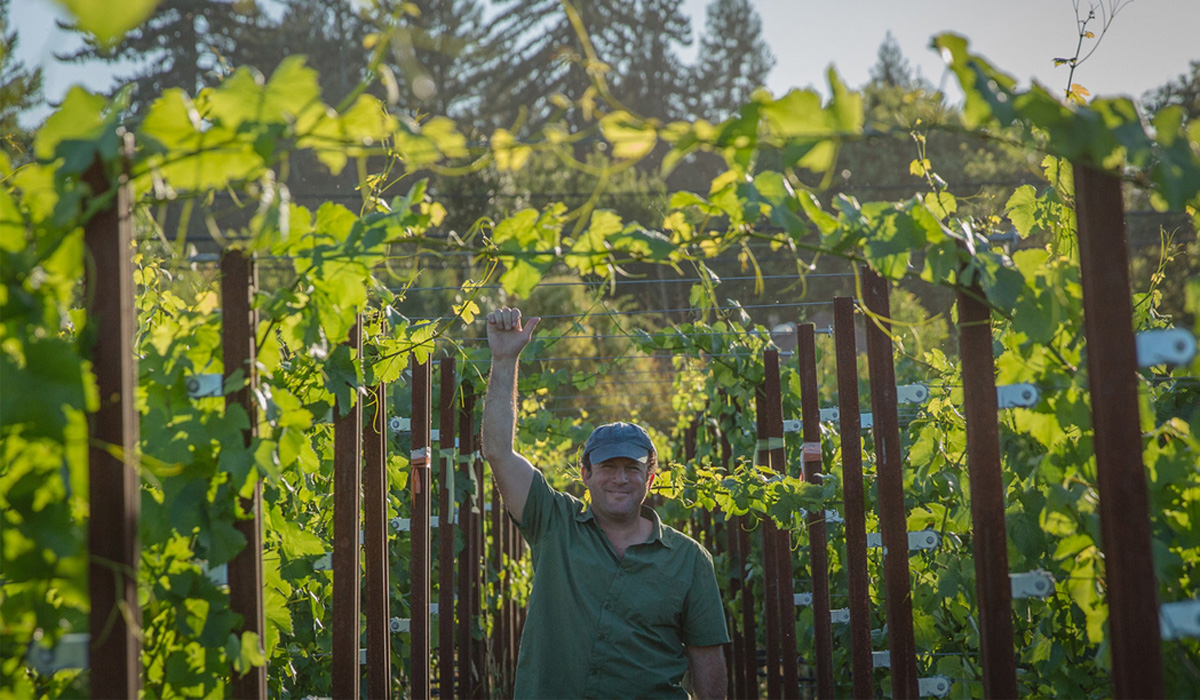 County Line owner and winemaker, Eric Sussman ’90 (CALS) developed his passion for wine growing while studying agriculture at Cornell. After spending several years in Washington’s Yakima Valley, he immersed himself in the old-world culture and traditions of France over two exceptional vintages – 1995 in Bordeaux at Baron Philippe de Rothschild of Pauillac, and 1996 in Burgundy at Domaine Comte Armand of Pommard and Domaine Jacques Prieur of Meursault. Apprenticing alongside men and women who have tended the same vineyards and wines through countless seasons reinforced Eric’s respect for the intrinsic connection between land, people, and the wine they produce.

Upon returning to the United States, and after a year of collaborating on the wines at Bonny Doon in Santa Cruz, Eric settled in Western Sonoma County and spent four years as the associate winemaker for Dehlinger. Working with one of the area’s finest estate producers enhanced his appreciation for the world-class wine grown in this region.

County Line favors traditional winemaking techniques and a shorter élevage in neutral French oak barrels or stainless steel. Each wine is made to provide a cool-climate appellation snapshot of the Anderson Valley, Sonoma Coast, Russian River, or the North Coast. 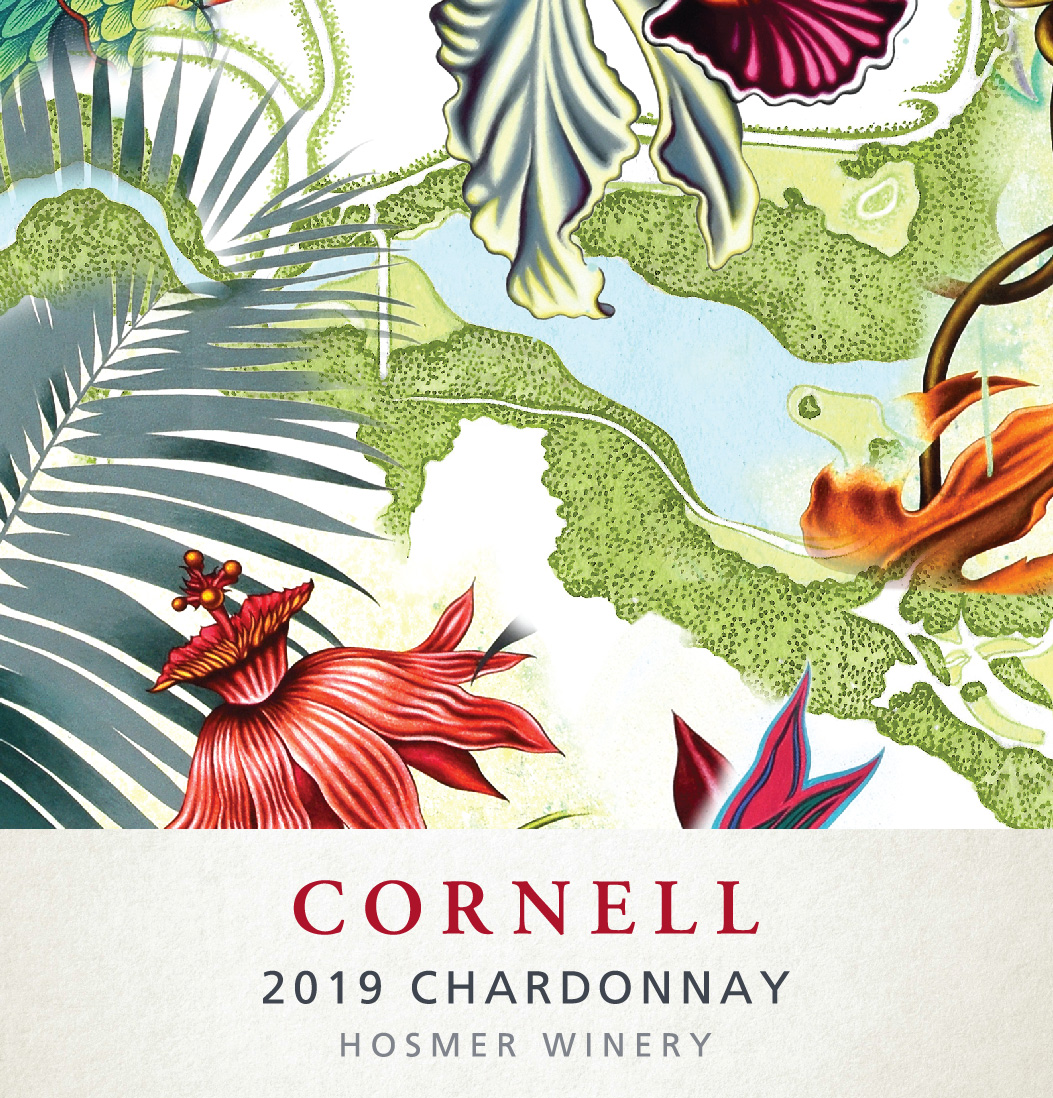 The first Chardonnay vines were planted on the farm in 1975, making them some of the oldest vines on the farm. They are trained to V.S.P. (vertical shoot positioning) and high cordon allowing for a mix of cultivation practices. The nose opens with lime blossom, jasmine, and rose. The mid-palate is carried by lemon curd, cumin, and quince. The finish has hints of orange blossom and rich papaya.

Hosmer Winery has some of the oldest Chardonnay vines planted in the Finger Lakes, growing beautiful grapes that are transformed into this lovely bottling. This is a wine that shows generous fruit and integrated oak character, yet also a restraint and minerality that nods to great White Burgundy from France; a crowd-pleaser for sure, but also a bottle that serious wine lovers will be impressed by.
— Thomas Pastuszak ’06, 2021 Alumni Wine Sommelier 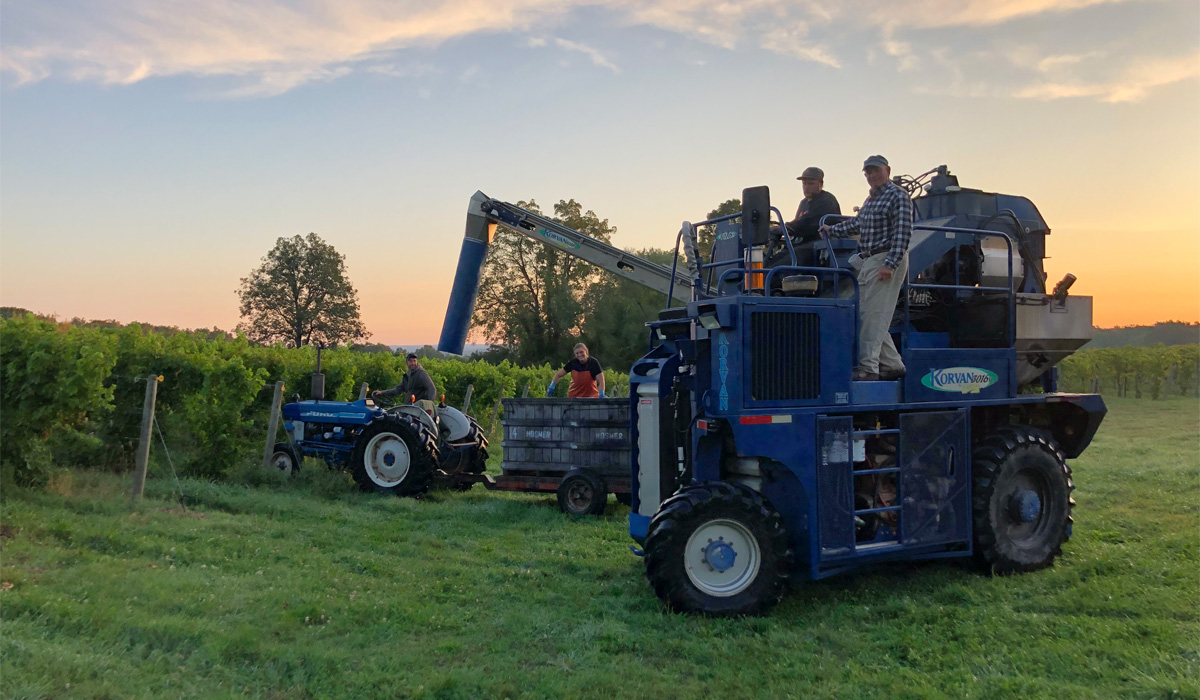 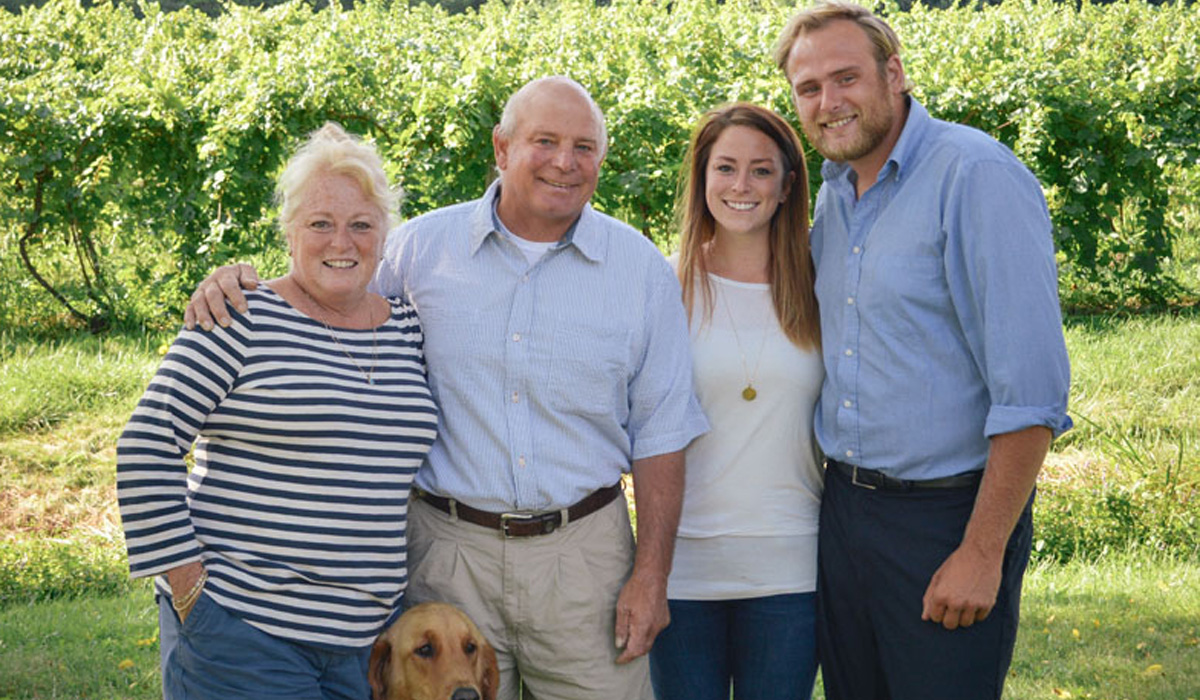 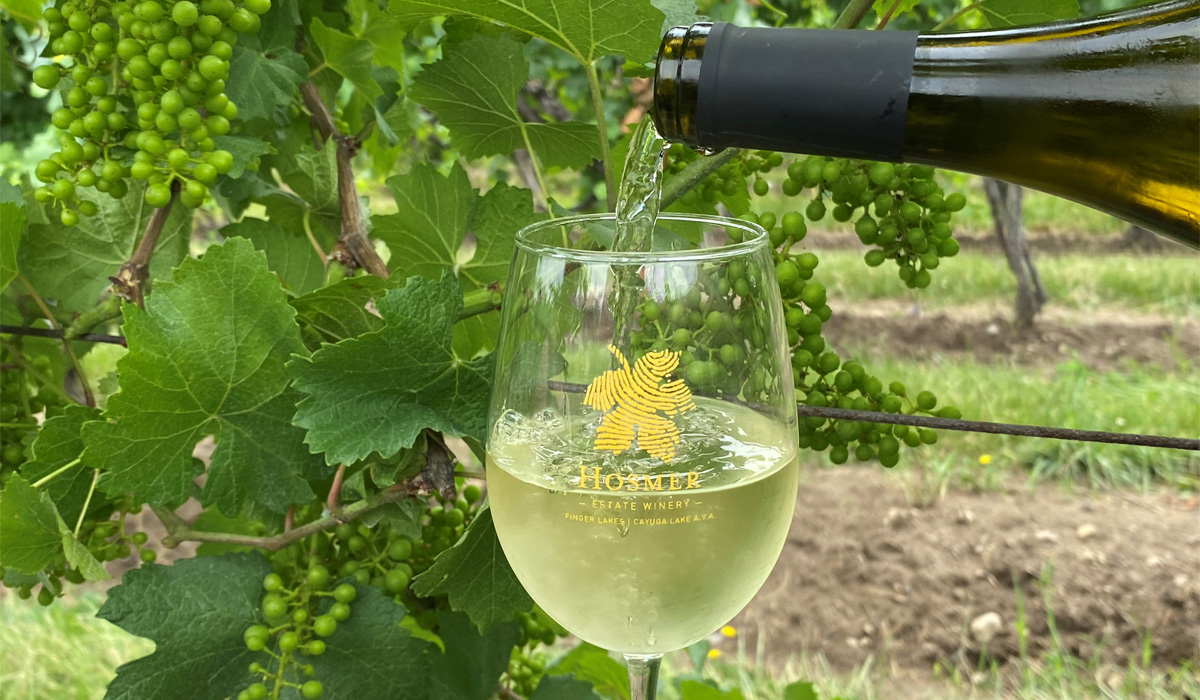 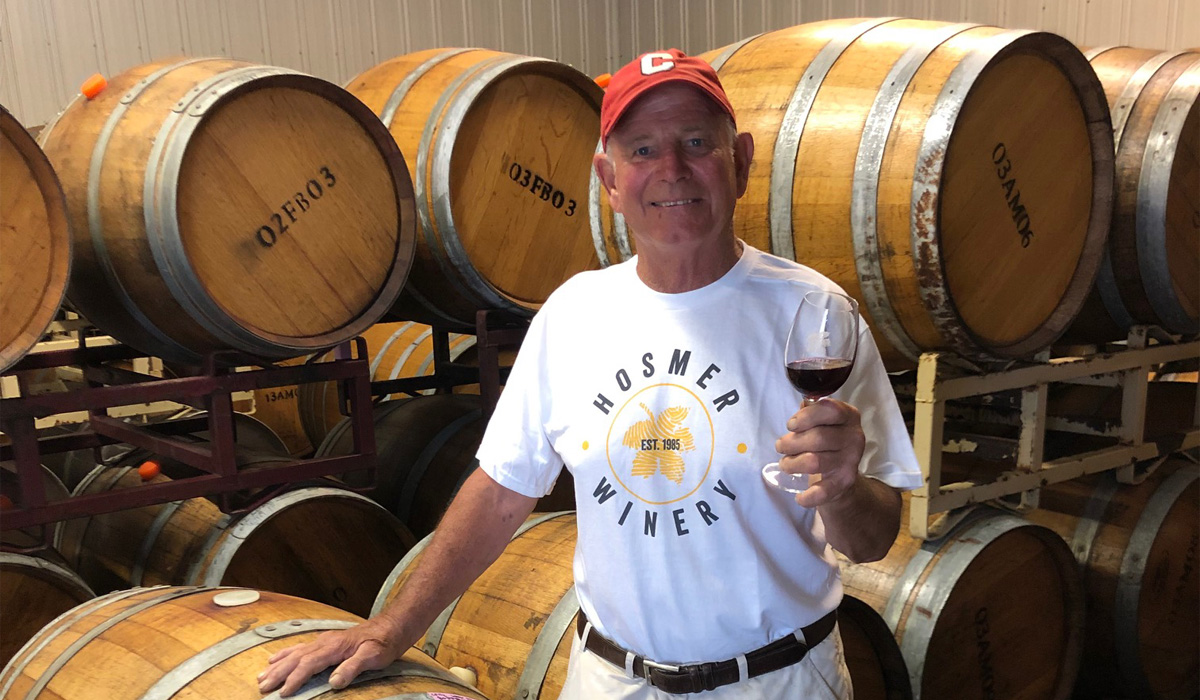 Cameron Hosmer ’76 (CALS) and wife Maren founded Hosmer Winery in Ovid, New York in 1985 on the principle that great wine starts in the vineyard. They already had the vineyard part down with over fifteen years cultivating 70 acres overlooking Cayuga Lake.

The estate's terroir is rich with not only the elements necessary for premium wine grapes, but also with the dreams of generations of Hosmers. Cameron's father, a Syracuse textile manufacturer, first envisioned growing grapes on the gentle slopes of Cayuga Lake at the family's summer home during the 1950’s. Later, Cameron headed to Cornell where he majored in Pomology (in addition to playing a lot of lacrosse) and poured everything he learned back into the Hosmer soil. And today, Cameron and Maren's son, Timothy Hosmer, works closely with winemaker, Julia Hoyle to produce consistent quality wines in the European tradition.

Hosmer wines focus on traditional Vinifera, but acknowledge their roots in the Finger Lakes wine industry with a handful of French-American hybrid varieties. Hosmer Winery produces just ten thousand cases annually because within this boutique niche, the team is able to assure the excellence of the entire process, from the fruit to the finished wine.

Hosmer wines have been recognized consistently over the years at both regional and international competitions, as well as by leading industry publications including Wine Spectator, Wine Enthusiast, Wine & Spirits, USA Today, The New York Times, and The Wall Street Journal. 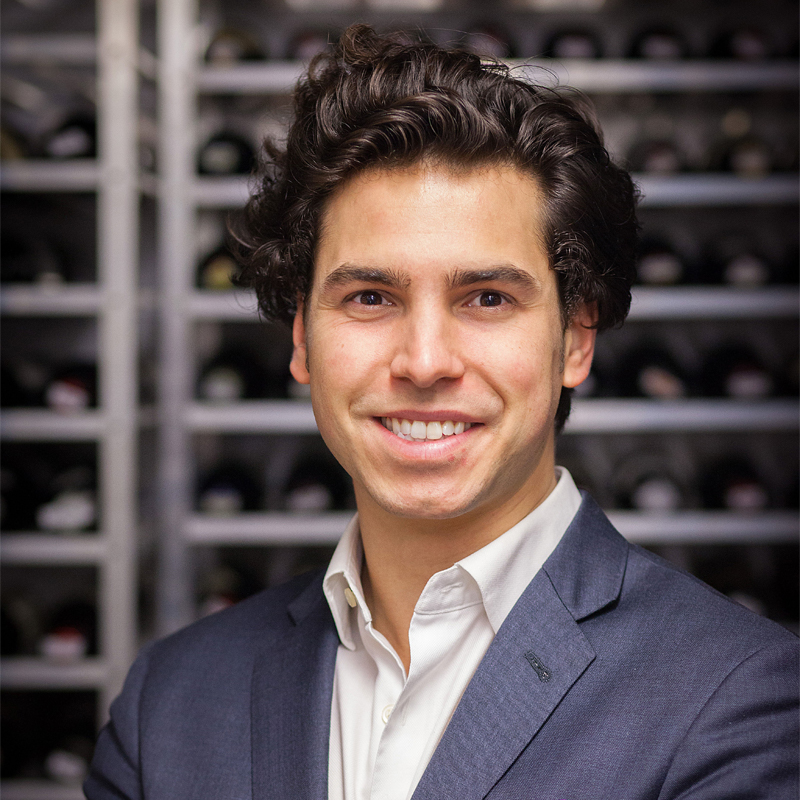 Born & bred in New York, Thomas Pastuszak ’06 studied neurobiology and classical piano at Cornell University, and all the while worked in restaurants to pay off his student loans. In January 2011, Thomas diverted from his path toward a medical career, and took on the role of Wine Director at Chef Tom Colicchio’s restaurant Colicchio & Sons in New York City, and would soon thereafter join the team behind the world-renowned Eleven Madison Park to create The NoMad in Spring 2012. He opened The NoMad as its Wine Director and helped it achieve its 3-Star New York Times rating within a few months of its opening, and now has moved into a new role as Executive Wine Director of all of the NoMad properties. Thomas was chosen as one of the Best New Sommeliers of 2012 by Wine & Spirits Magazine, recognized as one of Forbes' 30 Under 30 in 2013, and was named one of Food & Wine’s Sommeliers of the Year of 2015. Most recently, Thomas has gotten into the world of winemaking, launching three exciting new wine labels: Terrassen in 2013, Empire Estate in 2014, and VINNY in 2018, all with a focus on New York's exciting upstate wine region, the Finger Lakes.

Peter D. Gerakaris, BFA ’03 is an American interdisciplinary artist whose vibrant paintings and sculptural installations engage nature-culture themes through a global lens. Raised in New Hampshire, Gerakaris earned a BFA from Cornell University and an MFA from Hunter College where he received the Tony Smith Prize.

His artworks have been acquired by various institutional collections including the National Museum of Wildlife Art, NYC Dept. of Education, U.S. Art in Embassies Program (Gabon), Citibank, and many more. Having exhibited around the world from the Museum of Arts and Design (NYC), The Bronx Museum, and The National Museum of Wildlife Art to the Mykonos Biennale (GR), his works are also found in a spectrum of private collections such as Beth Rudin DeWoody and Cornell Trustee William Lim’s Living Collection in Hong Kong.

Having received numerous grants and awards from organizations such as the Andy Warhol Nature Conservancy and EcoArt Project, Gerakaris has also created many public, site-specific commissions for the Berkshire Botanical Garden, Bergdorf Goodman, Cornell Tech, and The Surrey Hotel. Notable public art commissions include a permanent, hand-painted installation spanning over 116ft at PS101 (Bklyn) awarded by the NYC Percent for Art Program. His work has also been widely featured in publications like Architectural Digest, W Magazine, and The Financial Times. Gerakaris served on the Cornell AAP Advisory Council where he enjoyed organizing and leading various alumni art tours. PeterGerakaris.com

Contact customer service to see if wine can be shipped to your state.